Topics: London System, Rapport-Jobava System Instructor: IM Milovan Ratkovic Level: Intermediate, Advanced
In this 5 hours video course, Milovan takes you one by one through 6 Black's major responses from 3...e6 to 3...c5, and explores the different variations on how White can go on the offensive with Black.
ON SALE!

Some call it the Jobava London system.

We call it the Rapport-Jobava system—a killer opening for club players and GMs alike.

Club players like it because it is less forced, less explored, and requires a lot less up-to-date theoretical knowledge.

Advanced chess players love it for the unlimited playing chances it proffers against a plethora of Black’s defenses.

Even top grandmasters like Mamedyarov, Radjabov, Nakamura, Naiditsch, and even Carlsen have started adding this opening to their repertoire. 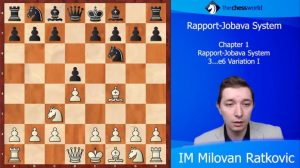 So why shouldn’t you? Especially when IM Milovan Ratkovic brings you his brand-new, exclusive course on the Rapport-Jobava system.

In this 5-hour video course, Milovan takes you through 6 of Black’s major responses from 3…e6 to 3…c5, and how White can go on the offensive.

Here’s what you will learn:

IM Milovan Ratkovic has wide experience as a chess coach and a player – this can be seen in his resumé which includes diverse accolades such as being a Serbian Junior Champion. Some of his top students have been able to reach 2400 Elo! IM Ratkovic is an active tournament player and one of his near-future goals is obtaining the Grandmaster title.

His dedication to the game and eagerness to share his knowledge makes him one of the best chess coaches out there.

Is this course for you?

Are you the kind of player who is always looking for action over the board? If every move looks like a potential sacrifice to you, then this opening is for you.

This opening is perfectly suitable for club players and grandmasters alike.

Club players love this opening because of its very, very little theory. Just learn the setup and get cracking right after finishing the course.

Advanced players love it because of the unlimited options it comes with. It results in sharp middle game positions where White’s strategy can swing between two extremes!