Topics: Queen's Gambit Instructor: IM Milovan Ratkovic Level: Intermediate, Advanced
In this 10-hour, 20-chapter course, IM Ratkovic reveals his complete opening repertoire against 1.d4 based on Queen's Gambit Accepted. If you want to get an exciting attacking opening that you know far better than your rivals do, THIS is your super-weapon!

How to Beat 1.d4, Outplaying Your Opponents Game-After-Game… all without Having to Remember much Theory

Ever thought that d4 players have things too easy?

They pretty much know they’re going to be facing either the King’s Indian or Slav/QGD and THEY get to choose which variation gets played.

This gives your opponent a big advantage in the opening… and they get the first move!

Hardly seems fair, does it?

Thankfully there’s a way to turn the tables and get that opening advantage on your side.

Ruin your opponent’s prep as early as move 2 with the Queen’s Gambit Accepted. This logical but rarely played opening is full of aggressive counter-play for Black – and lets you dictate play.

IM Milovan Ratkovic has a wide experience as a chess coach and a player – this can be seen in his resume which includes diverse accolades such as being Serbian Junior Champion. Some of his top students have been able to reach 2400 Elo! IM Ratkovic is an active tournament player and one of his near-future goals is obtaining the Grandmaster title.

His dedication to the game and eagerness to share his knowledge makes him one of the best chess coaches out there.

How is this course going to help me? 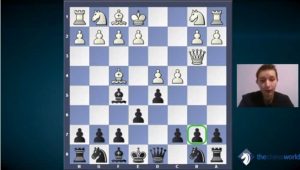 This Mastermind will teach you:

In this 10-hour, 20-chapter course, IM Ratkovic reveals his complete opening repertoire against 1.d4 based on the Queen’s Gambit Accepted. If you want to get an exciting attacking opening that you know far better than your rivals do, THIS is your super-weapon!

This is a complete attacking repertoire from one of the top young coaches in chess today.