This is a Free Chapter of the course: King’s Indian Defense Opening Lab with IM Milovan RatkovicIt contains one complete chapter of the full course with all the tools available in it, like the 365Chess Coach, the Repertoire Trainer, the database of games, etc.

Finding a strong weapon against 1.d4, that is solid yet dangerous for White is not a simple task.

That’s why most games after 1.d4 either end in a draw or solely controlled by White.

Trusted by the top attacking minds from Kasparov, Fischer, Tal to Nakamura, and Rajabov, KID has a well-deserved reputation of “1.d4 slayer”.

If you are looking for an opening system to beat the 1.d4, then KID should be your top pick.

The position on the board tends to be sharp and complicated. If you want to beat white after 1.d4… this is the way to go.

This opening is perfect for both attacking and positional players.

If you like to attack and take charge of the game, there are razor-sharp variations just for you!

On the other hand, if you are a positional player pick from one of the safer options to outplay your opponent.

Let’s get this fantastic opening from IM Ratkovic!

Want to buy the full course?

In this new 10-hour Opening Lab on King's Indian Defense, IM Milovan Ratkovic reveals everything you need to know to destroy opponents of any level in a vicious attacking style like Tal and Fischer! 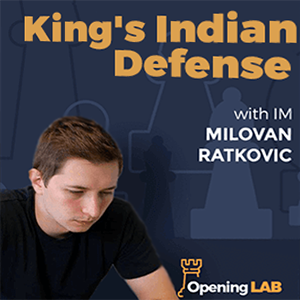