Looking for a powerful, attacking, ‘low-maintenance’ weapon against 1.e4?

Get ALL the benefits of playing the Sicilian while preventing the most dangerous counters without spending half of your lifetime memorizing the theory!

The Hyper Accelerated Dragon is your secret weapon! 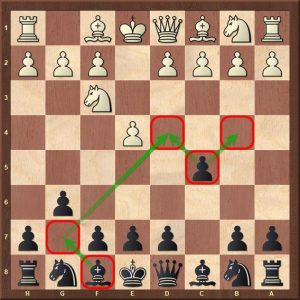 Black has multiple strong setups available while restricting White’s most dangerous responses including the Yugoslav Attack, Rossolimo, and the Moscow Variation.

Play a more favorable version of ‘modified’ Maroczy Bind, leading to very different types of positions… and White better know what they are doing, or the game will end with a quick 0-1.

GM Bryan Smith created a complete 10-hour Mastermind on Hyper Accelerated Dragon, where he reveals (the first time EVER) his entire preparation with black on this shortcut opening!

Here is what Hyper Accelerated Dragon is All About:

Hyper Accelerated Dragon is a “low maintenance” opening, unlike other variations such as Classical Dragon or Najdorf. No need to constantly update the theory.

GM Bryan Smith created a complete 10-hour Mastermind on Hyper Accelerated Dragon, where he reveals (the first time EVER) his entire preparation with black on this shortcut opening!