If you play 1.e4 with White you must be ready for all the Sicilians…

Scheveningen, Dragon, Najdorf… black is pretty much dictating the play.

What if you could cut 95% of theory, avoid the pet lines, and actually control the direction of the game?

This opening was proven to be effective at the top level by the world’s best… Garry Kasparov, Magnus Carlsen, and Fabiano Caruana all trust this system… yet it is simple enough you can learn it in just a couple of days!

GM Homayoon reveals his complete Anti-Sicilian preparation based on Canal-Sokolsky Attack & Rossolimo, which will surprise and frustrate your opponent handing you a well-deserved win!

Here’s what you are going to learn:

In short, you are getting the Anti-Sicilian opening preparation that is truly universal, yet simple to learn over the weekend and proven to be VERY effective against anyone from 1700 to 2600 Elo!

If you are a 1.e4 player and looking to bulletproof your preparation against the Sicilian Defense with an opening that you can learn once and win games for years-to-come… this is for you. 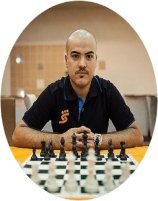 is an Iranian chess grandmaster, winner of Asian Championship U18, bronze medalist of Asian Team Championship, winner of Turkmenistan open and national rapid and blitz Champion. He is an active chess player and a full-time coach.