Topics: English Opening Instructor: GM Damian Lemos Level: Beginner, Intermediate
The English Opening (1.c4) is an excellent choice to get an edge in the opening by learning recurring themes instead of navigating a jungle of variations.

How to Play The English Opening – GM Damian Lemos

Looking for a strong chess opening for White that doesn’t require memorizing endless amounts of theory to get an advantage?

The English Opening (1.c4) is an excellent choice to get an edge in the opening by learning recurring themes instead of navigating a jungle of variations.

With the world’s best players such as Aronian, Kramnik, and Karpov adopting this opening, you’re in an excellent company and can enjoy being a master of one of the most exciting options available to White.

In this comprehensive 8-hour Deep Dive course, GM Damian Lemos builds up your knowledge of this powerful opening weapon, demonstrating how to combat each of Black’s main variations in turn.

After covering all reasonable setups for Black, GM Lemos shows you how these ideas play out in practice through the analysis of instructive games, making sure you’re always ready with the strongest reply!

This is an excellent way to frustrate your rivals who have trusted responses to 1.d4 and 1.e4 but will find themselves clueless in the positions you will have mastered.

The English Opening gives you excellent winning chances due to its complexities. It is a highly flexible, tricky, and strategic opening with which White can outplay opponents before they even realize what’s happening, confidently going on to win the full point.

Damian Lemos is a grandmaster from Argentina with a top rating of 2559 Elo.

In his lessons, Damian works closely with students to first identify the flaws and weaknesses in their games so that they can be properly evaluated and corrected.

By developing specifically-tailored training regimens for every one of his students, Grandmaster Lemos is able to achieve results that other chess coaches dream of.

Playing the English Opening can be a vital alternative for all 1.e4- and 1.d4-players who are tired of repeatedly entering the highly theoretical terrain of all the main lines Black can choose from.

The English Opening allows the White player to immediately take the opponent out of his comfort zone by playing a move which is not as frequently played as 1.e4 or 1.d4.

In contrast to White’s two main moves 1.e4 and 1.d4, White takes control over the center (especially the d5-square) by moving a flank pawn. The fight for the d5-square is paramount in the English Opening.

White not only eyes this square with his first move (1.c4), but also continues with g3 and Bg2 as well as Nc3, further strengthening control over d5 (see the diagram to the right).

GM Damian Lemos shows you everything you need to know in order to play the English Opening with confidence and dominate your opponents.

Here’s part of what you’ll learn with this course:

You’ll learn Kramnik’s powerful pawn storm plan leading to a deadly exchange sacrifice 21.Rxf6!! This devastating attack came literally out of the blue — in a non-theoretical position where his 2629 Elo opponent felt completely safe! What could you do to your opponents with such deadly ideas in hand?

Discover the simple strategy Karpov has used since 1977 to gain a central grip that squeezes strong GMs to death! (He makes it look so simple…and it is! GM Lemos explains his strategy in a clear way so you too can adopt it and win!)

If your opponent plays 1…e5, adopt Kasparov’s approach and play it like a Sicilian…with an extra tempo! Discover how Kasparov used this method to DESTROY the mighty Ivanchuk — mating him in just 25 moves!

GM Damian Lemos argues that this move is logical in the Sicilian Defense with Black (1.e4 c5 2.Nf3 d6 – introducing respectable Sicilian main lines like the Najdorf or the Dragon).

Why shouldn’t you play it with an extra tempo with White, too? The move 2.d3 has already been played by chess giants like Kramnik and Grischuk.

One key idea of the move 2.d3 is that it prevents Black from playing certain variations he would be able to play after 2.g3 or 2.Nc3.

Statistically speaking, the move 1…c5 is one of the moves most frequently played against the English Opening. After 2.g3, Black has various setups at his disposal. 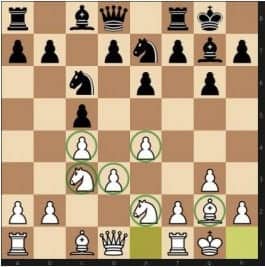 Note that the knight from g1 goes to e2 rather than f3 for two reasons. First of all, with a knight on e2, the f-pawn is free to advance. Secondly, the knight on e2 is better placed for the fight to control the d4-square.

If the knight was on f3, Black would often have the chance to pin it with …Bg4. The dark-squared bishop usually goes to e3 (or g5) and the queen goes to d2. The rooks are placed according to one of White’s main plans, mentioned below.

According to the opponent’s setup, White has three main plans at hand and can basically play on all parts of the board:

– White can keep the center closed and play on the kingside with f2-f4-f5, creating an attack against the opponent’s king.

– White can play in the center by preparing the move d2-d4, aiming for a space advantage.

– White can keep the center closed and expand on the queenside with b2-b4-b5.

So whether you want to play this opening dynamically like Kasparov, or quiet and deadly like Karpov — you’ll have everything you need right at your fingertips with this Deep Dive.