Garry Kasparov is widely believed to be the best chess player in the history of the game. Kasparov’s accomplishments on the board are unparalleled, as the former World Chess Champion dominated the game with a fury that has not yet been matched.

Aside from a powerful desire to win and fighting spirit, what really distinguished Kasparov’s play was the incredibly high level of opening preparation.

Kasparov’s opening play frequently led to an enduring initiative that he would convert to dazzling sacrifices and winning attacks. 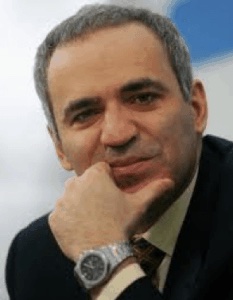 In this 3-hour chess course, Grandmaster Damian Lemos explains 9 of Kasparov’s most instructive victories – focusing primarily on the opening technique that granted the former World Chess Champion strong positions to attack from.

Viewers will not only learn about Kasparov’s preferred opening systems in many of the most common chess openings ever played – viewers will also learn how Kasparov used powerful chess psychology to attack his opponents from every angle!

Grandmaster Lemos’ presentation in this chess course is extremely clear and concise, and the target audience is an intermediate level for this video series.

Damian Lemos is a grandmaster from Argentina who has reached a rating of 2559 Elo.

Damian Lemos was no stranger to success from an early age, achieving the FIDE Master title at only 14 years old, International Master at 15, and Grandmaster at 18.

In his lessons, Damian works closely with students to first identify the flaws and weaknesses in their games so that they can be properly evaluated and corrected. By developing specifically-tailored training regimens for every one of his students, Grandmaster Lemos is able to achieve results that other chess coaches dream of.

How do I benefit from this course?

GM Lemos will not only show you some of Kasparov best games, but also explain the reasons behind the moves in the opening, and provide expert insight about Kasparov’s aggressive chess psychology.

In this chess course, Grandmaster Damian Lemos will teach you how to win like one of the best players ever! If you are a club-level chess player that wants to WIN MORE GAMES – this course is guaranteed to give you a strong push in the right direction.