Destroy White with The Accelerated Dragon

The Accelerated Dragon is an exceptional variation of the Sicilian Defense. It is an effective system for Black against 1.e4 where Black develops rapidly and achieves strong activity early in the game via minor piece play in the center.

This system has been employed by countless top Grandmasters over the last 70 years, including legendary names like Viktor Korchnoi, Vladimir Kramnik, Alexander Morozevich, Vassily Ivanchuk, Alexander Khalifman, and many more.

The Accelerated Dragon is so frequently played at the highest level of chess tournaments because it is a very successful opening system for Black, permitting double-edged play and decisive results, while not being as risky as the classical Sicilian Dragon setup.

It is also very popular at the Grandmaster level because it is a very flexible opening scheme – you can transpose to the Accelerated Dragon from numerous lines in the Sicilian Defense.

Eugene Perelshteyn is a grandmaster and author. He became an International Master in 2001 and obtained his Grandmaster title in 2006. He also won the U.S. Junior Closed Championship in 2000.

He’s currently one of the top players in the United States.

Perelshteyn began playing chess at around seven years old, taught by his father Mikhail Perelshteyn, a professional chess coach. At the age of 10, he played in his first tournaments.

In 2001, Perelshteyn was awarded the Samford Chess Fellowship by the US Chess Trust. After taking two years off from school to play chess professionally, Perelshteyn returned to the University of Maryland, Baltimore County and graduated in 2004. 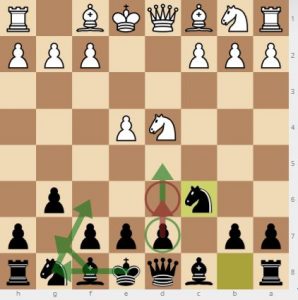 Many chess courses will teach you the move orders and nothing else – however in ¨Destroy White with the Accelerated Dragon¨ GM Eugene Perelshteyn focuses on the ideas behind the moves.

After watching this chess course, if your opponent deviates from the main moves early in the game, you will have nothing to worry about because you will truly understand the most effective plans, instead of memorizing topical move orders!

This chess course presents over 2.5 hours of extremely high-quality grandmaster instruction, reviewing all of the main lines and sidelines in the Accelerated Dragon system.

GM Perelshteyn recommends a hypermodern approach with an immediate kingside fianchetto to avoid early deviations from the Accelerated Dragon (such as the Rossolimo Variation with 1.e4 c5 2.Nf3 Nc6 3.Bb5).

With this hypermodern approach, you can narrow down your focus in the opening to really choose the lines that you want to research and play.